Hello, my name is Mike.  I am a retired First Responder.  I have spent over 30 years serving the citizens of Maryland.  I retired in 2017.  A few years after retirement, I started having nightmares and severe anxiety and was diagnosed with severe PTSD.

I got my service dog Phoenix, a Black Lab, in 2019.  Phoenix is trained to provide blocking, covering, disruption, avoidance and deep pressure therapy.  The ERWD has helped facilitate Phoenix's transition into becoming a service dog.  The staff is knowledgeable and supportive every step of the way.

​Since Pheonix completed his training, he has helped me manage my PTSD.  This would noy have been possible if not for the ERWD.

As parent of a 16 year old special needs child, that is autistic and wears braces for supports, Shylow is very helpful to Diann. Shylow watches Diann and helps prevent her from falling by supporting her. Shylow also has been helpful before by alerting me when something is wrong with Diann. Once at the Children's Hospital, where Diann was staying eight floors up, Shylow and I were about to go home. Shylow had sat down at the car and looked at me then looked at the hospital door in the garage at Children's Hospital for a quick few minutes. I had told her to get up in the van but she appeared to know something was wrong upstairs and she could not go home yet. I called my wife, who was with Diann, and she had said she has enough help. Shylow and I returned back upstairs. There were four nurses holding down Diann because she had gotten upset because Shylow and daddy had left. After we had got Diann to calm down I told her Shylow and I would return the next day Sunday. Diann calmed down that night. After Shylow and I had gotten back to the van and I was on my way home I called Kyle and asked him if he had taught Shylow to do that he said no she picked that up on her own. As a parent of an autistic daughter I can see the help Shylow does for Diann just by being there with her and looking out for her. Shylow is even requested by the staff at Children's Hospital. They want to make sure we bring Shylow as much as possible because even they see how much support and help Shylow is for Diann. I am very happy we asked Kyle if he might know where we could get a service dog. Kyle showed Diann 2 dogs that he thought might be good for her. The first dog came out and you could see the first dog was not for Diann. Then Kyle brought out Shylow you could see that Shylow was the one. My only wish is some day the schools would allow service dogs to help the special needs kids. But I can really say Shylow is a very special dog and she really does help our child Diann. I am happy that Kyle at The Elite Registry of Working Dogs told me he would help us to find Diann a service dog. He did not let us down at all. Kyle and The Elite Registry of Working Dogs has and will always be part of our family. Thank you again Kyle and your family for helping us find Shylow.
​ 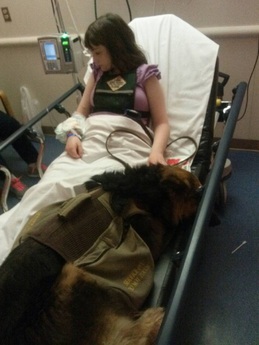